With Biden Weaponizing the NFA, Its Time to Repeal It!

The Biden Administration is weaponizing the National Firearms Act of 1934, or NFA, to ban roughly 40,000,000 lawfully acquired pistols.

Tentatively, ATF has scheduled Biden’s Pistol Ban for implementation in August of 2022.

That’s why we need you to take action and tell your elected representatives to repeal the NFA restrictions on SBRs, SBSs, and AOWs before Biden abuses them! 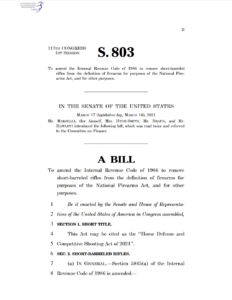 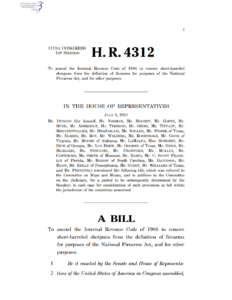 Any Other Weapon
Repeal 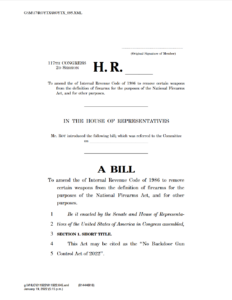 GOA Plans to File a Lawsuit

GOA already has announced plans to sue the Biden Administration to prevent these rules from going into effect.

But as we did with our bump stock case, GOA’s legal team must wait until the final rule is published until we file our lawsuit, for two important reasons.

First and foremost, ATF’s Final Rule may be different from the currently available text of its Proposed Rule. GOA’s attorneys will need to analyze any Final Rule when it is published (possibly in August) in order to craft an effective response. Final rules issued by administrative agencies often differ (sometimes substantially) from what an agency initially proposes. Although everyone knows what ATF has proposed is illegal and unconstitutional, we must wait patiently until any rulemaking is a “done deal.”

Any pre-emptive lawsuits or actions would not be a responsible use of your generous donations to the Gun Owners’ Legal Defense Fund.

Second, and for related reasons, according to blackletter law, federal courts do not have jurisdiction to issue opinions about things an agency might do, so GOA must wait until gun owners are actually being harmed (or threatened with impending harm) by the implementation of a Final Rule before we can file our suit.

If we don’t wait for the appropriate time to file our lawsuit, ATF could seek to have our case dismissed for lack of standing.

This is also why Gun Owners of America does not rely on legal battles in the court system as the Second Amendment’s first line of defense.

But GOA has NOT been sitting idly by, waiting for a gun ban to work its way through the Swamp and into the court system.

Instead of twiddling our thumbs waiting for Biden to ban our guns, GOA has been rallying politicians AGAINST the President’s actions to ban braced firearms.

But critically, we’re not only defending the status quo—we’re working to restore your long-lost rights.

Since the NFA was enacted in 1934, the status quo has been gun control—registration, taxation, regulation, and bans.

It’s past time for the NFA to GO!

It is your constitutionally protected right to configure your guns to best suit your needs.

It’s clearly an infringement to regulate, restrict or ban guns for being “too short,” and GOA has been saying this since our foundation in 1976.

With the Biden Administration actively wielding NFA regulations against the People, it’s time to fight back.

A lawsuit can only defend the status quo on pistol braces, but legislation could rectify this mess by repealing infringements and restoring our rights.

That’s why GOA has been lobbying for the introduction of three deregulation bills:

Just this week, the final bill of this trifecta was introduced by Rep. Chip Roy of Texas. Thank you, Congressman Roy!

The best response from Congress to the Biden Administration’s proposed ban on 40,000,000 firearms is this: stop regulating SBRs, SBSs, and AOWs.

These laws are unconstitutional, do nothing to make us safer, and are now being abused to implement a federal gun ban!

This is a Historic Moment for Gun Rights

A decade ago, there were only a handful of pro-Second Amendment stalwarts in Congress like Rep. Ron Paul introducing No Compromise legislation for Gun Owners of America.

Today, we have nearly 70 unique cosponsors on these bills to repeal the NFA laws regulating SBRs, SBSs, and AOWs. That’s no small feat!

Gun owners like you have spread the message of liberty to the masses.

Because of your efforts, anti-NFA legislation like the Second Amendment Rescue Plan has a strong foothold in Congress.

Biden is weaponizing the NFA, but we’re going to fight back.

With support for this legislation growing in Congress, there is a clear path to an NFA-free future.

Pro-gun Members of Congress are waiting to see which way the wind will blow when the pistol ban is implemented.

Is it “pro-gun” enough to only protect the legality of pistol braces?

How You Can Help Us Repeal NFA Infringements

By getting your elected representatives to back NFA-repeal type legislation when pro-gun politicians are in the minority, we’re setting the standard for when an ostensibly pro-gun majority retakes control of Congress.

Gun owners can now demand to know why their elected representatives support the gun registration, taxation, and regulations that the Biden Administration is using to ban roughly 40,000,000 firearms!

If your representative OPPOSES the registration, taxation, and regulation of firearms, then they should be cosponsors of the three bills to deregulate SBRs, SBSs, and AOWs. If they aren’t, demand to know why!

Using GOA’s grassroots action alert tool, you can find out whether your elected representatives support your rights or support Biden’s ban on 40,000,000 lawfully acquired firearms.

Alternatively, if your elected representative is a cosponsor of all three types of legislation, GOA’s action alert tool will thank them for their patriotic defense of your rights.